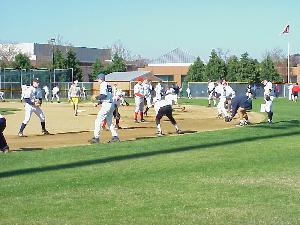 After several summers of juggling "high profile" summer team schedules, college camps, premier and not-so-premier summer showcases I feel that I can offer a little insight into the college camp selection process.

With the cost of a typical one-week baseball camp at a college being measured in hundreds of dollars getting the most "bang for your buck" is very important.

The reality of the college baseball program's summer camp(s) is this; They are used for two primary functions - Provide a recruiting tool for the host school coaches (identify potential future players), you can see evidence of this in many of the camp brochures - "We currently have 12 players on our roster that attended the Northeast State Tech baseball camp." And second to be a revenue source for the host school coaches and the baseball program.

The reality of the college summer baseball camp, for the player is that it is an opportunity to meet a school's coaches, (maybe a few current players) visit the campus, and meet the academic advisors. I suggest scheduling a visit to the admissions office in conjunction with a weeklong camp. And finally and most important let the coaches know of a player's interest in the school.

What type of things should a player and his family consider?
The answer to that question depends on what a player is truly looking for in a college camp.

Talking to a host school coach will also help build a "recognition level" for a player. The coach will remember the player's name when he attends the camp.

** Remember that NCAA rules prohibit a coach from calling a player prior to July 1st of the summer preceding his senior year. So you may have to make more than one telephone call to reach a coach. Ask when the best time to reach a coach would be. This will help limit any games of "phone tag."

Here are a few items to consider on your initial evaluation of a college camp: Cost - no small consideration with some camp's cost being $500.00 or even more.

Can a player get the same or even better exposure at a camp that costs $100.00 as he can get at a perceived "elite camp" that costs $500.00 or more? Many times the answer to this question is yes. The old adage of "you get what you pay for" does not necessarily apply to the college baseball camp.

Many college baseball programs charge a high price for camp attendance "because they can", the success of the team's program has created a demand for the camp, not because the information offered at their camp is better than one that costs much less.

Typical number of players at each camp
Some camps have 400 - 500 players of all ages, in attendance. Not an optimal experience in my opinion. Many times these large numbers lead to a huge "baby-sitting" chore for the camp coaches and administrators.

Some of the larger schools will have a week long camp that is geared to the best caliber players. They go by names such as "select camp", "super skills", among other titles. If a player can afford the cost of these camps they are usually the best avenues for exposure. These camps allow a player and the coaches to evaluate a player's skills and abilities against other players of similar skill levels.

Many schools have starting incorporating a "pro style" try-out segment into their camps. Many times area professional scouts will be in attendance.
Typically these camps will include a coaching staff made up of smaller college coaches, as well as the host school's coaching staff.

Ask the baseball office if their program has such a camp, sometimes it is not clearly marked in the camp brochure.

Player to coach ratios
Very similar to teacher to the student ratios that many of us use when making a college educational decision.

The normal situation at a college camp is that the largest "position" groups are pitchers followed by middle-infielders, corner infielders, catchers and then outfielders.

Most camps do a good job of "covering" the pitching coach / player ratio. The weakest areas are many times the catchers and outfielders.

If you are a catcher the most important thing to ask is "who is the coach(s) that will be working with the catchers". The same applies to the outfielders.

Catchers can many times simply become "receivers" for the pitchers, at the camp, and some cases receive very little instruction or attention by the coaching staff. I personally witnessed a major D1 (top 40) college camp provide one current player as the "catching coach", for 16 catchers, at a week long camp. The best part of all? The player was an outfielder on the college team!

What is the experience level of the coaches at the camp?

Attending a camp with this type of instructional staff "make-up" is the optimal chance for exposure. Not only does a player have a chance to display his skills in front of the host school coaches, but also other schools that he may not have been initially been considering.

Many college camps will be made up of the host college's coaching staff, current team players and area high school coaches. The only true value in camps with this "make-up" of instructional staff is if a player is interested in attending that particular college.

Very little - if any exposure is received by attending a camp that is made up primarily of high school coaches. This is not a "rap" on high school coaches, many are better "teachers" than the college coaches. BUT the name of the game is exposure! Finding that one coach that likes a player enough to invest scholarship money in the player.

Geographic location of the college camp
Is the camp in the same hometown, state, or geographic region that the player lives in?

When asked what college baseball program a player would most like to play for the typical answer is a listing of the top programs in the country. (LSU, Stanford, Arizona State, Miami, Florida State, etc.) The true reality of this dream is that for most of these schools the need to recruit outside of their home state or geographic area is not necessary. Look at the rosters for these schools and you will find very few "out-of-state" players.

This makes the odds receiving a scholarship at one of the "sun-belt" schools by a player from the Northeast or Midwest much greater than those of the in-state player. Of course there are exceptions to this and the best players can play at the school of their choice.

Some major D1 programs recruit heavily "out-of-state." A few that come to mind initially are Georgia Tech, Clemson, Virginia, Tennessee and Kentucky. Many smaller schools D2, D3 and NAIA recruit heavily in the Northeast and Midwest. Don't forget about these schools when considering college camps.

College baseball summer camps are not an inexpensive proposition. Spend the time to review each camp that a player is considering. I recommend attending one (1) college camp each summer, maybe more if a player's schedule and a families monetary resources can handle it.

Be realistic about the player's ability and potential. While the Skip Bertman / LSU summer baseball camps are excellent and well run... why would a player from the Northeast (example), that is not considered a "blue chip" prospect spend the time and money to attend? A better use of resources may be closer to home.

Players and their families should not attend a college summer baseball camp in hopes of receiving intensive "one on one" instruction. That type of need is better served by finding a local baseball school or coach for private lessons.

Remember the name of the game is exposure. While that sounds harsh it is the true nature of the summer camp scene. This is true whether we are talking about baseball, basketball, football or any other high school sport.