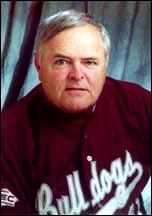 At a high school baseball information seminar, sponsored by Encore Sports and Perfect Game ID Camps, held in Decatur, Alabama, those in attendance were treated to the insight of college baseball coaching legend Ron Polk, of Mississippi State University.

As Coach Polk started his discussion, which was to be on the role of high school coaches and parents in recruiting, he announced, "The NCAA is the enemy of college baseball!"

Coach Polk further went on to explain that at this point in his career he has made it his goal to berate the NCAA leadership and its unfair treatment of college baseball programs, at every opportunity.

Coach Polk explained that several years ago it was decided that all NCAA DI men's sports scholarship totals would be reduced by 10%, across the board. This in the face of Title IX compliance. If you look at total allowable scholarships for men's sports you will see the unusual amounts, like 11.7 for baseball. This came as a result of reducing the previous number (13) by 10%.

Did you know that the NCAA Division I men's baseball College World Series is the second (2nd) largest championsip series sponsored by the NCAA? Coach Polk made this point .... the baseball regionals, super-regionals and CWS are surpassed in revenue generated for the NCAA only by the men's basketball tournament. What about football? Those bowl games are not revenue shared by the NCAA, only the participating schools and in some cases their conferences. And as Coach Polk asked ... "Does any of that baseball tournament money come back to college baseball programs in terms of increased scholarship amounts?" NO!

Coach Polk went on to discuss women's sports such as crew / rowing. The NCAA allows women's 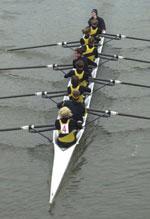 programs to give 20 full scholarships in crew. This, said Polk is an amazing amount when you consider that there is no such thing as a high school crew/rowing team! He went on to discuss how the University of Iowa filled their spots on the crew team the first season. Representatives from the crew team (coaches) and the athletic department milled around the freshman / new student enrollment tables. When an athletic looking female was spotted she was pulled over to a table and asked if she would like to be on the rowing team. Most responded by asking, "what is crew?" It was then explained that a full athletic scholarship was a part of the deal! It did not take long to find 20 new members of the Iowa crew team.

As a footnote Coach Polk added that when crew was added as a women's sport at Iowa and they did not even have a venue to hold home matches. They had to build a lake!

Coach Polk stated that in his next life he would like to come back as a women's golf coach, with 6 full scholarships.

Some other interesting factoids that Coach Polk shared with the audience:

The next factoids had to do with the Major League Baseball draft. Polk admitted to being a "college first" guy, but he also professed his love for all baseball, including the professional ranks. He did however want to share some eye-opening numbers with us.

For a listing of all NCAA scholarship limits, by sport and gender:
Scholarships